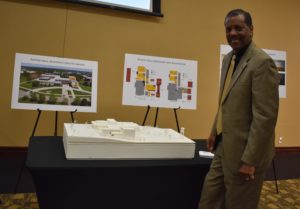 Missouri Western’s Potter Hall project received a $1 million pledge from Drew Brown, a University supporter from St. Joseph, Missouri. The gift will support the addition of a visual arts annex, which is one of the goals of the Centennial Capital Campaign. When the annex is constructed, the addition will be known as the Drew H. Brown Arts Annex.

“Drew has been one of Missouri Western’s most active supporters for many years,” said Dr. Robert Vartabedian, Missouri Western’s president. “He has provided leadership to many areas of campus, and I am very grateful that he has added to his legacy with such a generous gift.”

Brown, a native of Philadelphia, earned bachelor’s degrees in biology and German at North Carolina Central University in Durham. He was drafted into the U.S. Army in 1966 and retired  as a lieutenant colonel in 1992. His military service took him all over the world, and he received the Legion of Merit and the Bronze Star Medal. While in the service, Brown graduated from the U.S. Army Command and General Staff College with the equivalent of a master’s degree. He is the owner of Brown Investments.

Brown served on the Missouri Western State University Foundation Board of Directors for 12 years and is currently chair of the Missouri Western Arts Society. He has also served as a mentor and volunteer through the Center for Multicultural Education. In 2018, he received the Herb ’35 and Peggy Iffert Award for Outstanding Service to the University from the Alumni Association.

“I love this university,” Brown said. “Missouri Western brings so much to the St. Joseph community, and I welcome that, whether it’s arts offerings, the expertise of its faculty or, most importantly, workforce development. We all want a better life, and most students come to Missouri Western because they see it as the key to that better life. And I am committed to do all I can to help make people’s lives better.”

He said he especially likes that the University is an open-enrollment institution. “It gives people an opportunity to fly when they are not even sure if they have wings.”

Brown’s gift is part of Missouri Western’s Centennial Capital Campaign which launched in January 2015, the University’s centennial year. His gift brings the campaign total to $30,519,600 in outright and deferred pledges and gifts, exceeding the initial celebration goal of $20 million.

“I hope my gift will inspire others to do likewise, even if it is not to that extent, so we can continue enhancing the campus.”