It all started with Operation Opera. When the local movie theater began showing “Live at the Met,” operas, Laurel and Karen thought it would be a great experience for music and theatre students to attend, but they found out students couldn’t afford the tickets. So the two women raised money for students to go.

The success of Operation Opera led to a suggestion from Dr. Robert Vartabedian to start a giving society to benefit the arts programs in Potter Hall. And the women got it done.

Seventy-three people became charter members in 2011-12, and the membership has doubled since then. And, more importantly, nearly $200,000 has been raised for the campus arts programs. Membership dues have funded equipment, admission tickets to performances and museums, guest speakers and more. 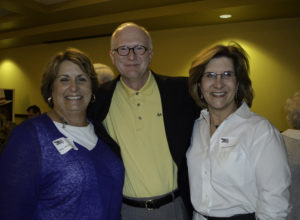 Bill Wright came on board when the Arts Society was getting started, and his connections garnered a backstage tour of the Kauffman Center for the Performing Arts in Kansas City, and more. He served as chair of the Council for six years.

Laurel said besides helping students and getting to know them, she appreciates that the Arts Society gave her the opportunity to get to know the arts faculty. “Sometimes people don’t realize how talented and extraordinary the faculty members are.”

Karen agreed. “I loved the engagement of the community with the arts students and faculty.”

The women met in 2008, not too long after Laurel’s husband became president of Missouri Western. Laurel and Karen said they felt an immediate connection with each other when they realized they both grew up in small Kansas towns (Laurel in Ashland and Karen in Belleville) and both had a love of the arts. Karen had moved to St. Joseph in 1992 and a year later founded Trails West!, St. Joseph’s annual community arts festival.

“I liked that the membership dues filled unmet needs and enhanced the fine arts at Missouri Western,” Karen said.

“It was always about the students,” Laurel said.