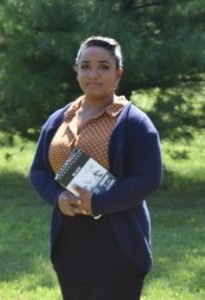 Student Alexis Carr always loved art and knew that’s what she wanted to major in, but she says she “found her calling” when she took her first art history class. And last summer, she found her dream internship when she was selected to work at the National Portrait Gallery in Washington, D.C. The Missouri Western Arts Society helped pay for Alexis’s housing there.

The studio art major and art history minor was selected for the nine-week Katzenberger Foundation Art History Internship through the Smithsonian Institute, which only funds six projects a year. Her project was “Recovering a 19th-Century African American History, Biography, and Portraiture through a Collection of Slave Narratives.”

“It was incredible. I was so honored to be there,” she said. “You can just feel the history and significance of what you’re doing and where you are at.”

Her research was part of a reconfiguring of the 19th century gallery to make it more diverse. She studied William Still’s book, “Underground Railroad Records,” which documents the stories of more than 600 slaves who escaped via the Underground Railroad in the 19th century, and she researched to find more information about those written about in the book. The book also contained more than 100 photographs. She also spent time taking inventory in one of the Gallery’s storage rooms, which was “really cool,” Carr said, and conducting research in the Library of Congress.

“It was inspiring to see so many people passionate about art, history and culture. It made me want to be a part of it,” she said.

She said she was also inspired by reading the stories of the slaves and what they made of their lives once they were free. “The stories were so heartbreaking. These people went through this and went on to do incredible things,” Carr said. “I thought, ‘if they could put the pieces of their lives together after that, then there’s no excuse for me to not do something great. It really put a fire and drive in me.”

Carr, a native of St. Louis, praised her academic department in giving her the experiences that led to her selection for the internship – conducting research with faculty members, starting an art history club and an art history symposium at the Albrecht-Kemper Museum of Art.

“My experience here is proof that there are a lot of opportunities at Missouri Western. You just have to be willing to seek them out and be willing to work.”